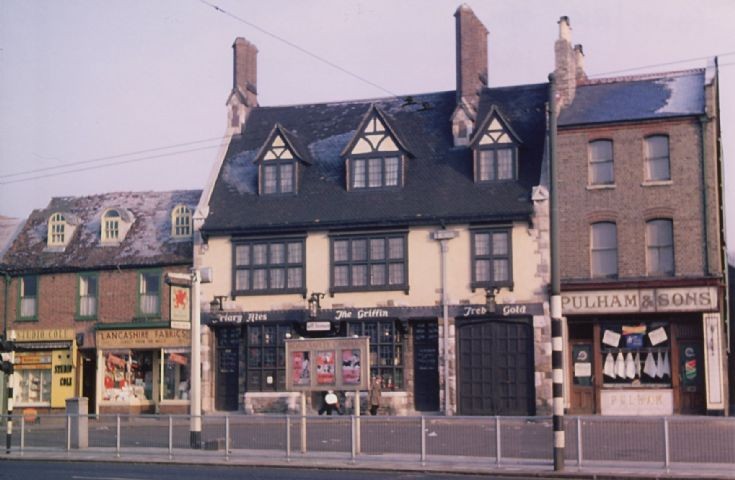 Outside The Griffin (rebuilt 1929) stands the whetstone whose origin is uncertain but is not, as some people claim, a stone used by soldiers in the Battle of Barnet to whet their swords. It was probably erected around 1733 and could have been used as a mounting block Oppositevthis site was the toll gate which was removed in 1863
Picture added on 21 September 2009 at 11:21
Comments:
Could I respectably suggest that this picture was taken considerably earlier than 1980. The war-time markings of the traffic light and what appears to be trolleybus overhead wires and pole would date it pre 1962.
Also, having grown up in Whetstone in the 1960s & 70s, the first shop I can remember where 'Pullham & Son's' is in the picture was a toy shop.
Added by Ken Goldsmith on 05 June 2014
Much earlier. I worked for Studio Cole from 1969 until 1974. The shopfront in this photo is from the 50's.
Added by Paul Wilmshurst on 22 August 2014
When we lived at the Hand and Flower from 1948 to 1955 Pulham's was the butchers. I remember the turkeys being in the window at Christmas!
Added by Lynette Benton on 12 May 2021