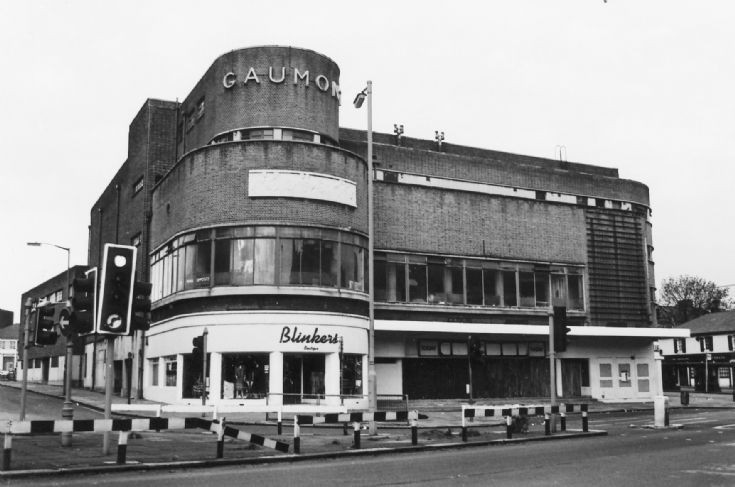 Gaumont, North Finchley. The cinema opened in July 1937 and closed in 1980 with, appropriately, a film entitled "The Last Picture Show". The cinema lay empty for ten years until its demolition in 1990, to make way for the artsdepot. Photograph taken in December 1980 by Doug Rose
Picture added on 23 October 2009 at 14:50
Comments:
there existed on this site 1920s erme cottages.and it belonged to the family of my grand ma, it was Tatt family home, where my great great grand parents lived.
Added by John Pope-de-locksley on 08 September 2010
If my memory serves me well, the Gaumont was demolished in 1987.
Added by Dino Lytras on 27 March 2013
Saturday morning pictures was so much fun and bring back so many happy memories . We always thought that the Gaumont was a very posh building to be in. Then have to stand for 10 years empty was terribly sad .
Added by Lydia (Brooks) Collyer on 30 April 2013
Hello everyone-

I’m a researcher/archivist on a project about the Gaumont Finchley and keen to speak to people who would like to share their memories about the cinema. Is anyone based in London that would like to meet for an informal interview? We are organising this in Finchley at 2pm on Thur July 10th but there will also be later opportunities.

Pls get in touch if you’d like more info
Thank you!
Added by Olivia Bellas on 26 June 2014
Hello, I used to go to the Gaumont every Sat/morn. That's where I learnt to smoke. We used to have the old man with a torch always on the go, for the little devils who where making a noise and laughing. "Any more of that and I,ll get the manager." However, what a great cinema.
Added by Rufus Jones on 26 February 2015
Me too Rufus I remember the Saturday morning pictures my mum used to pack us off with apples and oranges as our snack my first ever film watched there was Escape from Witch Mountain
Added by Joan Harty on 09 March 2015
I went to the Saturday morning pictures in about 1946 to 1949. It was a good time with friends and cheap - I think 9p. Can anyone confirm the price?
Added by John Selves on 28 April 2015
I went to the Gaumont in the 60s and have found memories, I used to work round the corner at Paulines Bakery, good days and memories, I was born just up the road,
Added by James woollard on 10 September 2016
Hi folks (Rufus Jones) pseudonym name for Chris Woodness (Woody) 7 Holly Park Road. Passed Away 3rd June 2016 RIP DAD 🙏🏼💐
Added by Tracey Nish. Nee Woodness on 08 October 2016
Hi Guys. I used to go to the Saturday morning pics with the other Bramber Road boys. It cost 6d plus spends at the corner sweet shop. Used to take the 521/621 to Tally Ho!
Added by Edward Beaber on 01 November 2016
I used to go to the Gaumont on Saturdays, I remember the 4 films we were shown, the first being a cartoon, the second a documentary, the third bring a serial and I have forgotten what the 4th feature was.. 1952 - 1955 approx. It cost 6d
Added by Roger Vyvyan on 05 November 2016
There must have been a cafe or similar on the first floor as I remember as a small child in the 50’s being taken for tea by my mother and sitting in the curved glass area, fascinated by the conglomeration of trolley bus wires strung across the road.
Added by Dave Roethenbaugh on 16 March 2019
I used to live in the top flat at the back of The Gaumont. Many memories, what a shame they've knocked it down.
Added by Dawn on 22 May 2020
There was a cafe in the Gaumont but don't remember too much about it. I remember going on the stage for a YoYo competition. Didn't win. I love to hear things about Finchley as I live in Australia, in lots of ways I miss the UK.
Added by Lydia Collyert (Brooks) on 23 May 2020
Hi everybody, went to the Gaumont every week during the 60’s. Does anyone know when the film Station Six Sahara was shown? I think it was (Sep 63 ) but would like to get exact date! Can anybody help?
Added by Robert Burgess on 21 December 2020